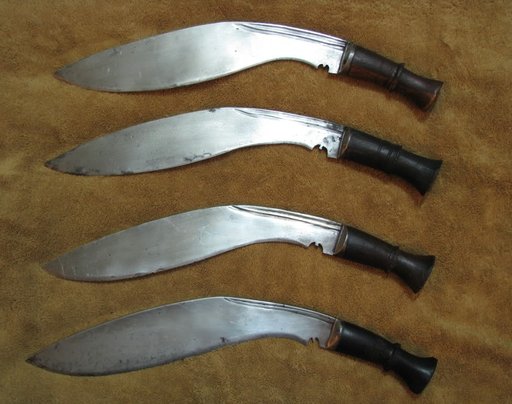 A selection of SGAK kukris from the author’s personal collection. Note that while all of these examples came out of the IMA/AC cache “D” (the bottom most example) appears to be a custom produced weapon. It has a hollow ground blade, a satin finish and a finely carved handle.

The “Short Gurkha Army Kukri” (SGAK) is something of a mystery.  These knives were marketed as “Bhojpures” by AC and IMA.  This is a reference to a region of Nepal that is known for making knives of somewhat similar shape, but it is unclear if there is actually any sort of direct connection between the region and the standard issue military kukri.  Like the Classic Gurkha Army Kukri, the SGAK is relatively common.  It is actually the single most abundant type of kukri in the AC/IMA cache.  My guess would be that something between 50% and 60% of all the military kukris brought out of Nepal fall into this pattern.

Of course establishing a “pattern” with a group of knives this diverse is something of a challenge.  Stylistically these knives are very similar to the CGAK, except that they are a bit shorter and lighter.  It is entirely possible that there are some older and more interesting examples that occasionally end up in this category simply because of their size and weight.

Here are some sample measurements:

E: (not pictured above) 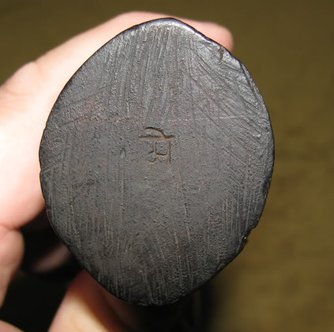 Unknown mark commonly encountered on the base of SGAKs. Author’s personal collection.

While it is probably not proper to group these knives solely on the basis of their length and weight, there are also other characteristics that do seem to be generally shared.  To begin with, the pattern of inscriptions changes dramatically when you examine any number of SGAKs. Most knives have no inscriptions at all.  The “3 Shri Chandra” formula, omnipresent on the CGAKs, is never seen on these knives.  This leads me to suspect that they were manufactured and issued after the end of his reign (in 1929).  Or possibly the marking of equipment simply lapsed as the years went on in the 1920s.  I have seen a few examples with other Nepalese inscriptions, but these all appear to be one-offs and do not to follow an official pattern.  I have also seen a few with carved patterns on the blade or handle that might be a form of “trench art.”

Another commonality is that many of these knives are marked with an unidentified Nepalese figure on the bottom of the handle.  I have never seen a CGAK marked with the same mark, though they often carry a numeral “1” (in fact I have seen the numbers 1-3 stamped into CGAK handles.  The exact meaning of this system remains unclear.)

It is also not particularly rare to find an SGAK that is marked with English numerals (usually four) and occasionally a two-letter abbreviation.  While going through the collection at AC I once ran across a dozen knives that were all marked SS XXXX.  The exact meaning of these marks, and who made them, remains a mystery.

English language stamps are actually seen from time to time on all of the preceding types of kukris that we have reviewed.  In my collection I have Sirupates, Budhumes, CGAKs and SGAKs that all have English language stamps.  To further complicate matters it does not appear that all of these stamps were applied at the same time or following the same pattern.  Sometimes three numbers appear, sometimes its four.  Sometimes there is a two letter abbreviation, sometimes it is three.  Sometimes only the letters appear and there are no numbers at all.  Usually the stamps are found on the spine of the blade, but rarely they are located on the handle instead.

English language inscription on the spine of SGAK “C.” 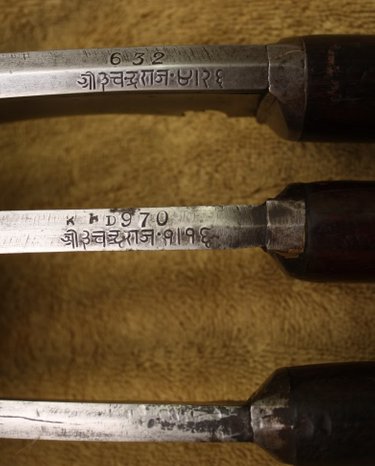 Note that A and B follow a different pattern. The “KBD” stamp is fairly common in English language inscriptions and has been encountered by the author about a dozen times.

Its meaning and origin is currently unknown. C is unusual for a CGAK as it has no markings at all.

Because of the lack of dated references it is hard to know exactly when the SGAK were produced.  I suspect that these knives were a product of the interwar period, possibly the late 1920s and 1930s.  They are as tough as nails and could have remained in service within Nepal for decades.  They are also a bit lighter and easier to use than the CGAK making them a very practical survival tool.

Press HERE to continue to part 7,