If the SGAKs are something of a mystery, the “Late Gurkha Army Kukris” are positively opaque.  This category corresponds somewhat to a group of knives that IMA and AC marketed as “WWI Vintage Kukris.”  This description is erroneous.  When first sorting through their find they relied on an important early kukri collector to identify and describe their material.  “Circa WWI” was what he came up with based on the general shape and size of the blade.  Today our understanding of Nepalese kukris is much improved (due in no small part to the large number of study examples supplied by IMA and AC) and that identification no longer seems as plausible.

The initial sorting of these knives was again done by size and weight and a few stylistic markers.  Here is a representative sample of what you might have gotten if you ordered one. 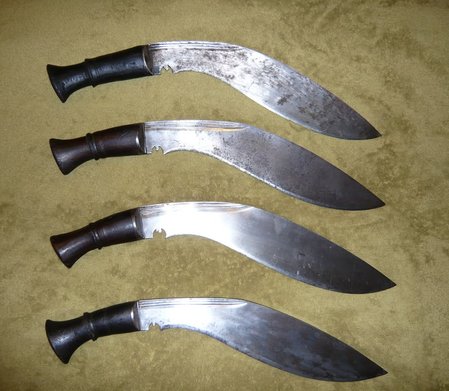 I have to admit that I am not quite sure how to handle this group of knives.  I am starting to suspect that they represent a late production run of SGAKs as Nepal was restarting its weapons production during WWII.  Many of these knives use totally traditional construction methods and come close to overlapping with the SGAKs in terms of size and weight.

At the same time, there do seem to be a few blade shapes in the batch that are generally not seen in the earlier examples.  One of my most beautiful knives (second from the bottom in the previous picture) has an elegant blade and a finely carved kaudi that is distinct from any SGAK that I have seen.  I have since run across a couple more blades produced on that same pattern, but none were in such good condition as the one I already had.

It is also interesting to note that many of these blades are carved with three fullers by the spine.  Often these are finer and very shallow (though not always).  With the exception of the very early Sirupate and Budhume models (which had only one very deep fuller) almost everything in the IMA/AC cache featured a two fuller design.  In that sense the “WWI vintage” knives were certainly a stylistic departure from what had come before.

There is another, more important, factor that led me to continue to classify these as a separate pattern.  A number of examples show some evidence of mechanization in their production.  Usually these knives appear to have had their fullers carved with an electric grinder.  Many also look like they were mechanically buffed.  A greater availability of sophisticated tooling might also explain why many of these knives have three fullers rather than the more common two, and generally more complex and finely carved kaudi.

A detailed closeup of LGAK “E.” Note the small striations in shallow fullers. Both the depth of the fuller and the regular pattern of the striations suggests the use of a mechanical grinder. Author’s personal collection.

Some of these later knives are very nice high quality pieces.  Their blades are often thinner and a bit more uniform than the SGAKs, making for a knife that feels great in the hand.  Further, the differential hardening of the edges of these knives is more pronounced, allowing them to be sharpened to a much greater degree.  This is particularly noticeable when compared with the CGAK.  These late examples offer a lot to like.

They also represent the end of an era.  What made the Nepalese military kukri distinct from the more commonly studied British and Indian examples was the fact that it was a handmade product.  Kukris were produced by skilled craftsman whose services were necessary precisely because of the British and Indian government’s economic strategies deprived Nepal of easy access to machine tools.  By the time you get to WWII that social and political system has started to change, and so had the nature of kukri manufacturing.  The industrialization of this process was just getting underway, but its effects on the blades that were produced in this later period is unmistakable.

Today it is still possible to buy a traditionally made “villager” kukri in Nepal.  Finding a craftsman who can produce anything like a CGAK is more of a challenge.  While the modern armies of Nepal, India and the UK buy large numbers of kukris every year, these are mass produced items churned out by factories.  While they all meet a uniform set of quality guidelines, you will never run across examples as outstanding as some of those made by the old master.

In my view, to qualify as a LGAK a knife needs to show either the use of a modern steel or mechanical pounding, grinding or polishing in its production.  After re-examining the examples above I conclude that “A” and “B” probably do not fit in this category (though they share a very similar blade shape) because they were made using only traditional methods.  Knives like “D” and “E” epitomize the changes that were just getting under way.  “C” probably also belongs in this category because it appears to be made from a more modern steel.  These knives may be a product of the late 1930s or 1940s.  It is even possible that their production continued into the post-WWII era.  Again, this is a rough guess based only on an examination of the knives themselves.

Press HERE to continue to part 8,

MILITARY AID IN THE COLD WAR