MILITARY AID IN THE COLD WAR

One of the more interesting things to emerge out to the armoury in Kathmandu was a number of British pattern, Indian produced, MKII and MKIII kukris.  One would not necessarily expect to see these knives as they were never issued to the Nepalese army.  Instead they were produced for the Gurkha Battalions serving in Europe and Asia during WWI and WWII.  In fact, MK II kukris from both world wars were in the shipment recovered from Nepal (the WWI knives sold out in a matter of months). 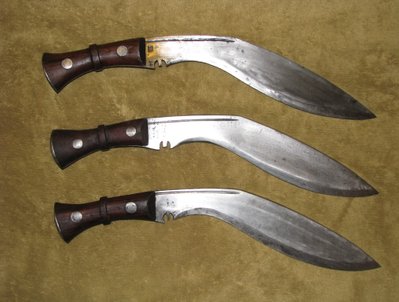 A smaller group of MKIII knives all dating from WWII. The top blade was produced by CMW in 1944, the middle example is from HW in 1944 and the last piece carries the iconic K-45 stamp (which was once mistaken for a model designation, instead it refers to the year of manufacture.) These knives are in almost untouched condition. Clearly they were never issued, even though the MKIII design has remained in continuous use in some parts of the Indian army up through the present era. Author’s personal collection. 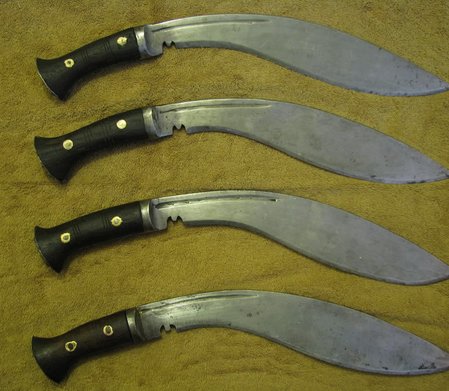 A group of four nearly identical MKII kukris all produced by Pioneer in Calcutta in 1943. Note that these knives are in very good shape for their age. They have never been issued or used in the field.

So why would India send Nepal crates of unused kukris?  Author’s personal collection

Most of the WWII dated MKII and MKIII kukris exhibited very little wear.  In fact many of them were basically new.  Given that condition is an important consideration for knife and bayonet collectors, this was great.  It is also interesting to note that many of these knives bear post-WWII Indian army inspection marks.  But how exactly did Nepal end up with crates of practically new fighting knives produced for the Indian army?

I have never been able to find any written testimony on the origins of these knives, but one of the Indian nationals who worked as a project manager for Windlass Steelcraft (the parent company of AC) related a suggestive story.  He believed that these knives had been shipped to Nepal during the Cold War by the Indian government.  India was contractually obligated to help Nepal by sending so many tons of equipment as “military aid.”  They filled their end of the deal by sending crates of obsolete weapons and equipment from WWII that was of no use to the Nepalese government.  They in turn just tossed the stuff in the Royal Armory (which by that point had become the “junk room” of the Nepalese military) and forgot about it.

I have no idea whether this account is true, but it might be worth looking into.  I do like it as a bit of folklore.  It illustrates the tensions between the Indian and Nepalese governments quite nicely.  These tensions helped to shape Nepal’s economic and military development in the 20th century.

I do not intend to discuss these knives in great detail as other, more knowledgeable, collectors have already explored this area.  Still, it is interesting to hold both a MKII and a SGAK in your hands and compare them.  To me the handmade Nepalese models always feel a lot more appealing, and I say that as someone who quite likes the MKII design.

The preceding article is far from exhaustive.  I have not attempted to catalogue every variant or reissue of all the kukris found in the Kathmandu cache.  Doing so would require a book, and that in turn would mandate a research budget and couple of trips to Nepal.  Unfortunately I don’t have the time or resources to undertake that project (though it does sound like quite a bit of fun).

Instead my goal has been to provide some basic guidance that will help readers to identify the different types of Nepalese military kukris and to offer some suggestions on how to better appreciate their intrinsic historical value and aesthetic beauty.  I have also attempted to make an argument about why collectors and historians should take Nepalese made kukris just as seriously as their mass produced Indian and British cousins.  The immense variability of these objects makes their study a pleasure, and every once in a while you run into something that takes your breath away.