This is a kukri that should receive a lot more attention and admiration from collectors than it normally gets.  I suspect that this particular model is often misunderstood by those who first encounter it.  It is that lack of sophistication on our part that often leads collectors to pass over the Classic Gurkha Army kukri (CGAK) in favour of the better understood, Indian made, “mark pattern” knives. 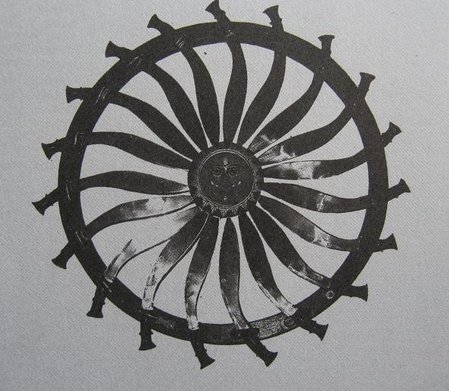 An old display from Nepal that appears to be constructed from CGAK kukris. Note that at least some of these kukris appear to have a “sun face” stamped on the side. The same motif is

repeated on the figure in the middle of the wheel.  Sun and Moon faces were important political symbols in Nepal in the 19th and 20th century.

Marketed by both IMA and AC as “Long Leaves” (a commercial term with no correspondence to Nepalese speech as far as I can tell) these blades are among the most commonly encountered in the Royal Nepalese Armory cache.  According to a conversation I had with Christian Cranmer, the owner of IMA and the individual who arranged for the sale of the Nepalese hoard, approximately 30% of the total 14,000-15,000 kukris found fall into this category. That means that there are likely 4,500 to 5,000 of these historic knives in Georgia, Pennsylvania and the hands of private collectors across the country.

These knives were the workhorses of the Nepalese military throughout the volatile first half of the 20th century.  While IMA advertises these knives as having been “retired in the 1890s” those dates are probably in error.  Most of these knives were made in the years prior to WWI and served through the interwar period.  This is confirmed by the fact that the vast majority of them bear Prime Minister Chandra’s stamp on the spine.  Further, there are photographs that seem to show Nepalese soldiers continuing to carry and use these knives into WWII and even the post-war period.  These were rugged knives and they had a long service life.

While not quite as massive as the Budhume’s, they are also fairly large.  Many of them feel like a small axe or hatchet in the hand.  This is probably not a coincidence as these were not made as special purpose weapons. Rather they were an all-purpose survival tool, and one that was going to spend a lot of time chopping wood to make fires or to reinforce machine gun positions.  This more utilitarian feel leads some people to dismiss the CGAK as a “clumsy” or “poorly balanced” weapon.  I think this misunderstand the actual life and needs of an early 20th century infantryman.  The CGAK stayed in service for as long as it did precisely because it met those needs admirably.

Six examples chosen as a representative sample of the CGAK from the author’s personal collection. 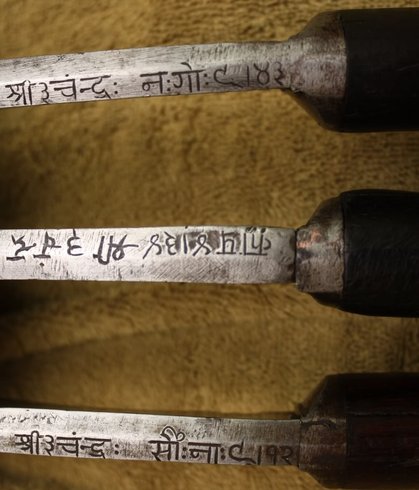 Inscriptions on the spines of D, E and F. Author’s personal collection.

While every CGAK that I have encountered has been handmade, it is important to realize that these were produced on an entirely different scale than the previous “Sirupates” and “Budhumes.”  While they were still made in traditional workshops, it would not be an overstatement to say that these blades were “mass produced.”  I strongly suspect that the 4,000-5,000 of these knives that ended up in the US are a small fraction of the total number actually produced.  Many of these knives appear to have walked home with their owners at the end of their term of military service.

Production on this scale means that there is real variability in the quality, size and handling characteristics of the knives that you will encounter.  Many CGAK’s are utilitarian and uninspired.  However, every once in a while, you run across one that was made by a master.  These blades just look different and they feel different.  Their roughness aside, they have a real beauty to them, and they are some of my favourite kukris.  Learning to appreciate their subtle differences and finding the right CGAK to add to your collection, is what makes the hobby worthwhile.

CGAK’s are also interesting as they are probably the most highly inscribed group of kukris that the average collector will encounter.  These inscriptions are important because they help to date and establish the history of a particular weapon.  Needless to say this elevates the appreciation of these kukris to a whole new level.

For years the exact meaning of these inscriptions eluded collectors and perplexed linguists who were repeatedly asked to translate them.  Only in the last few years have we gotten a good idea of what they actually say.  The first part of the riddle to be cracked was the introductory prefix.  Collectors figured out that this prefix never changed and a rough translation of it came out to be “Thrice Honoured Chandra” or “Three Shrii Chandra,” a reference to Prime Minister Chandra Shamsher Jang Bahadur Rana who ruled Nepal from 1901-1929.  It was also clear that all of the inscriptions ended with a series of numbers, but their interpretation was unknown.

The real problem lay between the honorifics and the numbers.  A set of two or three different letters (that made little or no sense when strung together as a word) was usually placed between the other elements.  Eventually I was able to shed some light on this particular mystery.  I am also interested in antique military rifles and I discovered something quite helpful while reviewing a book by John Walter on the rifles found in the Royal Nepalese Armory (Guns of the Gurkhas: The lost arsenal: pistols, rifles and machine- guns of the Royal Nepalese Army, 1816-1945. Tharston Press, 2005).

Many of the rifles photographed for this book featured inscriptions that were structurally similar to those seen on the kukris.  The inscribed elements on these rifles were generally “vertically stacked” rather than horizontally written, but when you broke it down the basic components were exactly the same in both cases.  Walter identified the two letter combinations as an abbreviation (rather than a word) that denoted a specific unit in the Royal Nepalese Army.  The numbers that followed corresponded to sub-units.  Walter was also kind enough to include a list of common abbreviations in an appendix.  His list can identify about 70% of the CGAK inscriptions I have encountered.  Even though the abbreviations for many other units are not listed, if you sit down with a list of known Nepalese battalions it is usually possible to figure out which unit a knife served with.

If you are interested in learning more about these inscriptions, this (khukurilipi.blogspot.com) is a good resource to be familiar with.  If by any chance you get stuck when trying to translate an inscription there are also knowledgeable individuals at IKRHS who are happy to help.

Many of these Nepalese battalions have had very interesting histories and one can often guess something of a knife’s service record if you can figure out what unit it was attached to.  The limitation that students in the west are facing now is that we just don’t have a lot of detailed military history on the Royal Nepalese Army available to us (as opposed to the British and Indian Gurkha Corps, which are much better documented).  As this information is translated and becomes more readily available, I suspect that it may have an important impact on the field of Nepalese arms collecting.

Press HERE to continue to part 6,