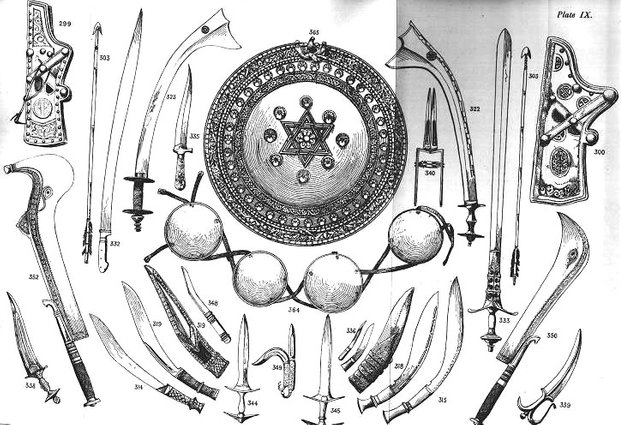 A drawing from Indian and Oriental Arms and Armour by Lord Egerton (1896). The kukris portrayed in this collection are truly ancient and show some subtle stylistic differences from the more modern weapons discussed here.  Note for instance the lake of a Kaudi on some of these examples, or the differences in blade geometry.

I bought my first examples of Nepalese military kukri from AC shortly after the cache was made public.  I loved these knives and they fuelled my imagination.  However it wasn’t until I discovered the International Kukri Research and Historical Society (IKRHS) and the Kukri Forum at Sword Forum International (SFI) that I began to appreciate the depth of the subject.  Both are wonderful places to educate yourself and ask questions.  The archives of both forums are extensive and worth reading in detail. [Editor’s note: the SFI forum is sadly no longer maintained.]

A few years ago I found myself in Atlanta, Georgia (USA). After making contact with the folks over at Atlanta Cutlery I got permission to drive out to their warehouse and take a look at the kukri collection.  I was blown away by what I saw and made it a point to return four more times with a friend and fellow enthusiast over the course of the next few years.  We examined literally thousands of kukris and took photos and measurements of hundreds more.  My repeated visits to the cache over a two-year period, and the numerous interviews I was able to conduct with individuals involved with the original IMA/AC find, provided me with the basic background that was necessary to write this short outline of the Nepalese military kukri.

At what point do we start to see the kukri used as a general purpose military weapon in Nepal?  This is actually a tricky question to answer.  If you go to some of the various military museums in Nepal, you might see examples of kukris with reliable provenances that date back into the 1600s.  Nevertheless, I don’t think you are likely to find anything in the IMA/AC cache that dates back that far.  Why?  Because most people in Nepal did not start to recognize the kukri as a ubiquitous national symbol (or even a common tool) until the early 19th century.

While kukri-like weapons have been carved in temple reliefs and are occasionally seen in ancient art throughout northern India, it is critical to remember that modern Nepal is a very ethnically and linguistically diverse place.  Most of these groups did not use the kukri as a tool or weapon prior to the end of the 18th century.  The first group that widely adopted the kukri as a weapon was the Gorkha kingdom centred in western Nepal.  Prithvi Narayan Shah, leader of Gorkhas, conquered Kathmandu in 1768 and laid the foundations for the modern state of Nepal.  His troops are reputed to have carried kukris (as well as other curved blades) and to have used them effectively in combat.

The widespread adoption of a new military technology takes time.  We can safely assert that none of the “standard issue” knives in the Royal Arsenal predate this 1768 terminus, and even the earliest examples are unlikely to show up for another generation or so after the new political order is established.  These are simply my own rough guesses of course, but I think their basic logic is sound.  Despite many claims to the contrary, the mass adoption of the military kukri is a comparatively recent phenomenon.  One is unlikely to ever encounter a weapon that predates the 19th century, except perhaps in a museum.

A relatively small amount of material in the Royal Nepalese Armory does date to the early 19th century.  I have yet to see a kukri from the cache that could be definitively linked to this period, though it’s a possibility.  Kukris are hard to date at the best of times, and lacking some sort of inscription that indicates otherwise it is better to error on the side of caution.  I suspect that in general western collectors overestimate the age of their knives.

One artefact that does appear in the IMA/AC cache from this early period is the highly valued Chupri Bayonet.  While not a “true kukri,” these cutting implements (when attached to the end of a Brown Bess musket) would have made a devastating glave.  Inscriptions on some of these bayonets indicate a date of manufacture around 1810.  And because obsolete arms tended to have a very long half-life in Nepal some may have stayed in service until the early 20th century.  This extended service life, along with the steady progression of military technology, probably accounts for their relative rarity. 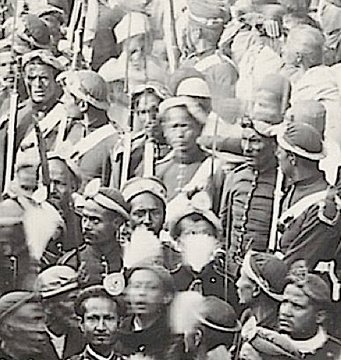 Members of the Nepalese Royal Army during a public procession in 1901.

Note that some of these troops are still carrying muskets topped with chupri bayonets.

(Hat Tip to Berkley at IKRHS for locating this image).

These are among the rarest kukri related artefacts to emerge from the Royal Arsenal, and because they are of great interest to bayonet collectors, they tend to command high prices.  Some well-preserved examples have an inscription on the “handle” that references “Lord Gorakhnath,” the patron saint of the Gorkha kingdom.  The mark of Gorakhnath (two foot prints) also appear on some musket barrels dating from this early period.  However, as time progressed references to this figure disappeared out of the catalogue of inscriptions encountered on Nepalese weapons.  I suspect that these bayonets point to a transitional moment in the construction of the modern Nepalese identity.

Press HERE to continue to part 3,

NEPALESE MILITARY SIRUPATE: THE EARLIEST OF THE ISSUE KUKRI. 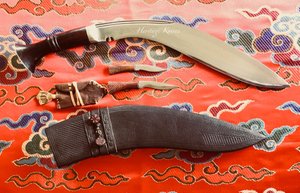