THE EARLIEST OF THE ISSUE KUKRI. 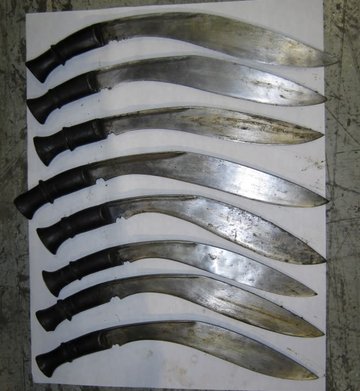 A selection of “military sirupates” photographed on the floor of the AC warehouse in Georgia, 2009.

Note the shallow and elongated kaudi on these specimens.

One of the issues that needs to be tackled in the discussion and classification of Nepalese military kukris is terminology.  To be totally honest, we don’t know all that much about how the kukri was discussed or classified in 18th or 19th century Nepal.  There is a large body of terms that have become common among western collectors, yet there are persistent questions as to whether these are being “correctly applied” and what (if anything) they correspond to in Nepalese.  Many of these seem to be commercial terms that were invented for advertising purposes (such as ‘long leaf’).

In the following article I propose a number of labels, sometimes using traditional terms, to refer to different types of kukris that sometimes appear in the IMA/AC cache.  I would like to make it clear that I am using this terminology in the absence of anything better, and I am not particularly wedded to these labels.  One shouldn’t read too much into them as other collectors might use the same terms slightly differently and we quite frankly have no idea how these knives were discussed at the time of their creation.

The oldest group of knives that I identified in the AC/IMA cache as having a definite “type” were the “Military Sirupates.”  The terms “Sirupate” is a reference to a blade of grass.  The label is often applied to knives that are relatively long and lean.  Occasionally these knives also have a somewhat straighter profile, however examples are also seen with more pronounced curves.

Kukris of this general shape are more often seen in some areas of Nepal than others.  However, they never appear to have been all that common in military service.  My research strongly suggests that they were a rarity in the Nepalese Royal Armory.  At most 300-400 blades of this type were found in the AC/IMA cache, and that number may be an overestimation.

I personally saw about 100 pieces during my visit to the AC warehouse in Georgia and was informed that this was all they had found.  These knives have been sold at gunshows and in the AC showroom, but they have not yet been advertised to the general public.  Collectors are most likely to encounter them on the secondary market or in an online auction.  If you ever end up with one be sure to keep your sales receipt.  That document will be the only thing linking your knife back to the Royal Armory in Kathmandu.

Many of these blades exhibited fine craftsmanship.  On average blades weighted between 400-600 grams (depending on length) and were exceptionally well balanced for fighting.  Here is a group of representative measurements that I collected from a sample set. 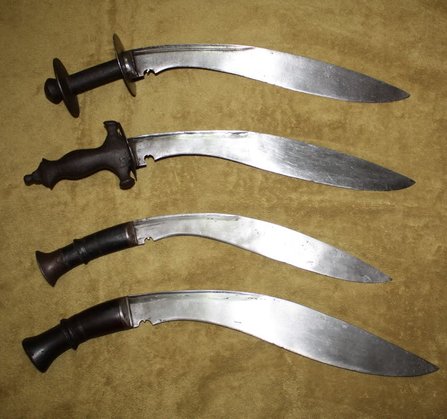 A group of “military sirupates” from the author’s personal collection labelled (top to bottom) A-D. Note that the top two knives are mounted in replacement sword hilts and the third knife has a steel butt-cap. This was the only example of such a butt-cap that I encountered in the cache.

As you can see from the measurements and photographs above, there is a fair amount of variability in this group.  This is a general trend. There seems to be less standardization among the older kukris throughout the cache.  The age of these knives was also attested by the fact that in a large number of cases the original handle was either missing or replaced.  In some of these cases the handle was replaced with a sword hilt, indicating that the repair was being done at a time when there were still swords laying around the armoury.  Other handles were very rough (which is odd as Nepal is renowned for its traditional wood carving) and may have been waiting for the finishing touches that were never applied.

A number of factors, including visual inspection and deterioration, lead me to conclude that this is the oldest “group” of knives seen in the Royal Nepalese Armory (not, I hasten to add, the oldest individual specimens).  Dating them is more of a problem.  I would place them in the second half of the 19th century.  Not earlier than 1850, and probably in the 1860-1880 range.  This is admittedly a very rough estimate and may be subject to revision.  However, the rarity of these knives is not in question.  They should be considered highly collectible.

Press HERE to continue to part 4,

MILITARY BUDHUME: A MASTERPIECE OF CRAFTMANSHIP. 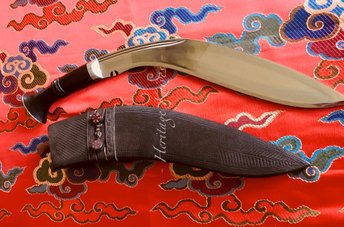 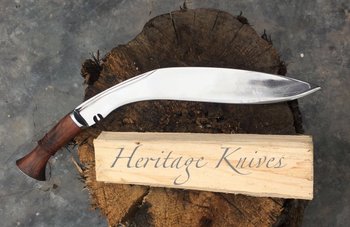