A MASTERPIECE OF CRAFTMANSHIP.

The term “Budhume” is applied to kukris that are particularly broad, having an exceptionally wide blade when measured from spine to edge.  Like the much more svelte “Sirupates,” these are only rarely encountered when exploring the holdings of the Royal Nepalese Armory.

The specimens documented below were evidently all made by a single highly skilled smith or workshop in a single run.  They are among the most impressive and best constructed kukris in the entire collection and should be considered to be highly collectible.  In my various visits to study the cache I counted and measured about 100 examples (all had been previously separated out from the rest of the shipment when they were first found in Nepal).  Conversations with individuals who had been with the project since the initial excavation of the collection in 2003 led me to conclude that only 200-300 examples of this type were found in the entire cache.

The first thing that strikes you when holding one of these knives is their sheer size.  This is a truly impressive weapon.  Here is a list of measurements that I took from a representative sample. 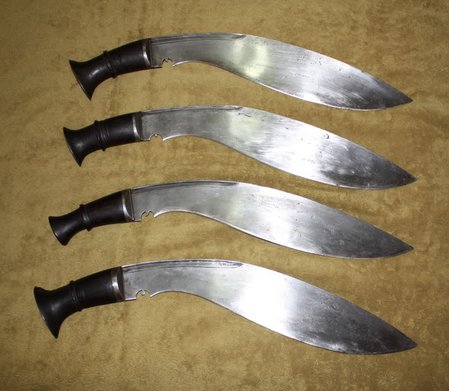 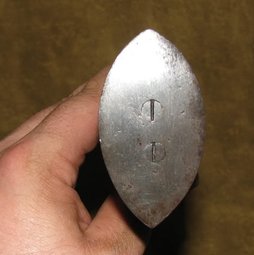 The level of craftsmanship on these knives far exceeded what was necessary or seen on any other specimens in the IMA/AC cache.  The blades are elegantly shaped considering their large size and the carving of the kaudi (or notch at the base of the blade) tends to be more ornamental and detailed.  All of these knives were originally fitted with a steel butt-plate (held in place with two screws) to protect the base of the handle from chipping.  I examined a number of these screws and each one of them was handmade with hand-cut threading.  In cases where the metal plate was torn away or missing the base of the handle was often reshaped to eliminate chips and keep the knife looking presentable (see example “C” in the previous photograph).  In all honestly, I have never seen that level of maintenance on any other standard issue Nepalese military kukri.

Butt-plate of a military Budhume (“B” in the previous photo).

These knives also occasionally bear interesting inscriptions.  Every one of them is marked with a stamp that looks like the letter “papu” (sort of an inverted “B”).  There has been a fair amount of speculation about what this mark means, but to the best of my knowledge no definitive interpretation has yet been advanced.  If you get a hold of one of these examples you should also check the spine.  In some cases the spine is totally smooth and unmarked.  In others there is complex inscription that looks like a short sentence.  And then finally there are examples where this inscription has been partially “erased” and a simpler set of identification numbers placed at the base of the blade. 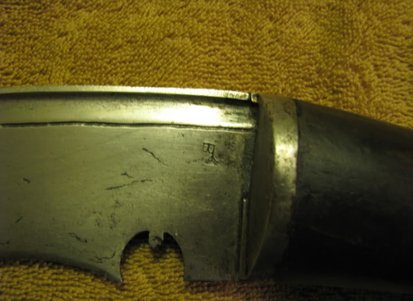 The “papu” mark on a “Military Budhume.” This mark was present on every example in the Kathmandu cache. Its exact meaning is still unknown.

We will talk about the exact method of interpreting these inscriptions later, but their presence is important because it provides us with some valuable information about how we can date these knives.  These sorts of inscriptions were added to both kukris and rifles in the Royal Nepalese armory by order of Prime Minister Chandra Shamsher Jang Bahadur Rana who ruled Nepal from 1901-1929.  We know that some older material was also inscribed, but probably only if it was in service (none of the Brown Bess muskets got the “Chandra” treatment for instance).  The fact that a number of non-inscribed examples still exist suggests that these knives were made prior to the start of that program.  In fact, I have in my possession a kukri whose blade has been inscribed with the year “1894.”  Its size, shape and geometry is very similar to the ones above, but it lacks other features such as the papu stamp.

I suspect that most of these knives were made in the closing years of the 19th century and into the opening years of then 20th (circa 1890-1910).  Examples that were still in circulation were inscribed, and at least some of them survived long enough after Chandra reign that his mark was removed when his political opponents were able to come to power.  The variety of markings on these blades is a powerful testament to the long working life of a knife like this.  This particular batch of kukris might have been in active circulation for 30 years or more.

Press HERE to continue to part 5, 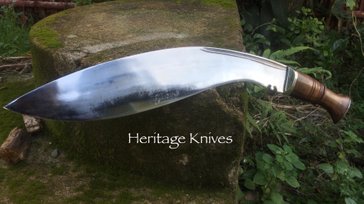