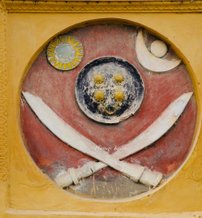 NOTES on the GORKHALI (NEPALESE) ARMY, an historical evolution over centuries. 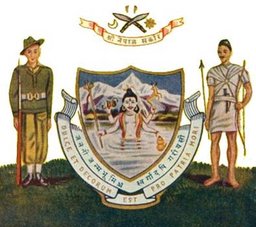 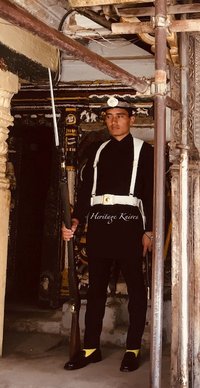 Minor variations of the uniform can be seen, for example the belts and shoulder straps.

The early Gorkhali military (Permanent troops) wore traditional Nepalese Labeda Suruwal in black, leather belt (and/or the traditional “patuka” cloth belt) and a black turban/hat with insignia of brass, often a crescent moon, or if of higher rank the armourial bearings of the regiment.

High Officers such as Sardars had more freedom to choose suitable uniform to reflect their rank and status. 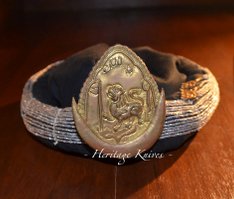 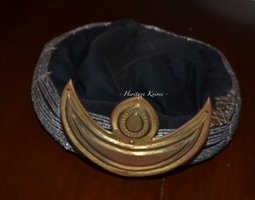 The same basic hat but with a variation of the front insignia. 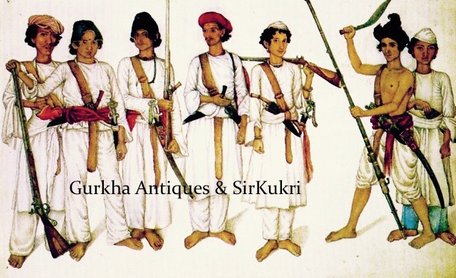 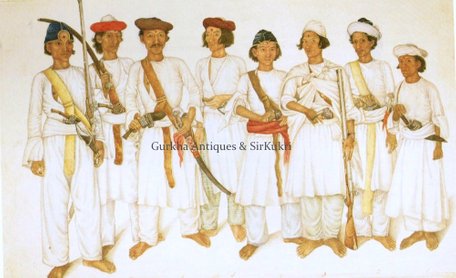 Gorkhalis or as stated "Goorkhas" from J.B. Frasers work in 1815 which resulted among othersin "Journal of a tour through part of the snowy range of the Himala mountains and to the sources of the rivers Jumna and Ganges" (1820). He also employed Indian artists from Delhi to make portraits of local recruits and Gurkhas. 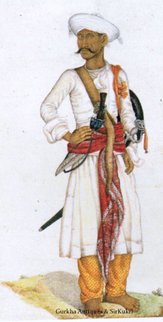 The Khukuri is worn in a traditional manner in all images, tucked into the "patuka" waist band. On most traditional Khukuri´s there are two buttons in the front which stops the scabbard from slidding through and secures it to the waist band, instead of sword/knife frog.

None of the troops in the images from 1815 are wearing the earlier black uniform but mainly white. More then likely these were irregular troops, which made up the largest part of the military. Many would join the British East India Company following the War and now known as Gurkhas/Gorkhas.

Mid 19th century, the start of the Rana era.

It seems that by the mid 19th century British influenced uniforms were the norm within some part of the military. Image 1. also shows black uniform, similar to those of 1760´s and image 2. shows troops wearing white traditional uniform along with one man in blue coat. Prime Minister Bhimsen Thapa around 1810 was the first person in Nepal to formally hold the rank of "General" instead of a Nepali title. He is also known to have used British inspired uniform and employed French technicians to modernise weapon production. 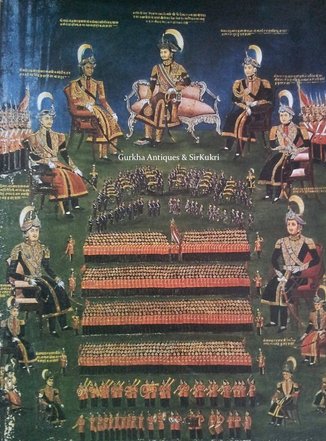 Image 1. A contemporary Rana era painting of the Government and Military, as the country was governed by the highest ranks of the military, basicly a military State and a continuation of the earlier Shah dynasty mode of statecraft. Maharaja Jung Bahadur is in the top middle, his brothers on the sides, all holding the rank of General.

Uniforms of the soldiers are clearly seen as wearing red coats and black pants, while there is also troops wearing blcak uniforms, probably traditional and not British inspired. 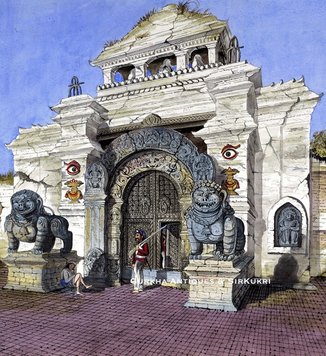 Watercolour of the "Gateway in the Durbar, Khatmandoo. 1858" by Dr. Henry Ambrose Oldfield.

"The most important building in the city is the darbar, which is situated in its centre...The darbar covers a considerable extent of ground, and is of an irregular quadrangle form."

The old Royal Palace, often referred to as the Hanuman Dhoka, is located on the Durbar Square in the old city, as is the Kumari Chowk, home of Kathmandu's 'living goddess'.

A soldier with red coat and white pants is guarding the entrance. 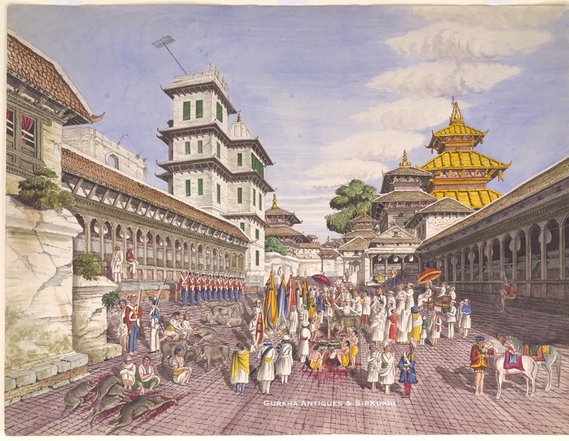 The Durga puja (Dussehra) is the festival commemorating the victory of the godddess Durga over the buffalo-demon Mahisasura and runs for ten days in the beginning of October. Dr. Oldfield states

"The ninth is the principal day of the festival, and on it the great slaughtering of buffaloes at the headquarters of regiments occurs...In the Kot, where seven regiments are quartered, the number of animals killed is very great...The King and principal Sardars are usually present at the Kot to witness the scene. About one hundred and fifty buffaloes are killed within the quadrangle of the building during the night and early morning. It is a curious sight. the bands are playing, guns firing, and the animals are brought up for slaughter one after another, without any attempt being made to clean the yard or wash away the torrents of blood which are streaming all over the place..." 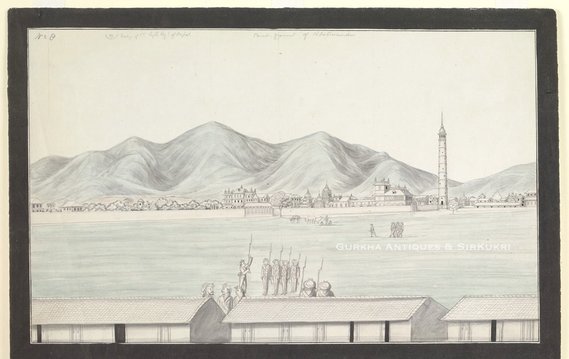 Pencil, wash and watercolour of the Parade Ground at Kathmandu in Nepal, part of the Lawrence Collection, by an anonymous artist working in the Nepalese school, c. 1843-1846. Inscribed on the front in pencil: 'No. 8. (c) Badge of 1st Rifle Regt. of Nepal. Parade ground of Khatmandu.'

The image shows the Dharahara tower ('Bhimasen's Folly'), in the distance on the right. Built in 1832 by Bhimsen Thapa the Prime Minister, the Dharahara served as a watchtower. Once open to the public, the top of the tower has a good view of the Valley. Newar temples, European-style mansions, and the hills beyond can also be seen in this view. A group of sepoys stand in the foreground wearing the turban-ornaments (star and moon) to which the inscription refers.

Henry Montgomery Lawrence served as the British Resident in Kathmandu 1843-45.

A interessting article on Jung Bahadur’s Love for British guns.

Image from Gustave le Bon, a well know scholar of his time and the first frenchman to visit Nepal in ca. 1885-86 and published "Voyage au Népal" in 1886. His image of the four soldier (left) shows them wearing probably a adpated traditional Uniform instead of the Red Coat which may have been a only a ceremonal uniform. The Kukri/Khukuri is still worn in the Patuka waist band which would suggest a traditional uniform, but as shown there are buttons in the front which is from the British style uniform adapted earlier.

Right, image from approx. 1901 but in black and white and difficult to say if the Red Coat or other colour. The head badge has also been adapted. The Rifles have some form of a bayonet, likely the Nepalese adaptation style. 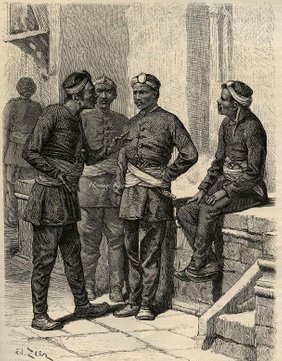 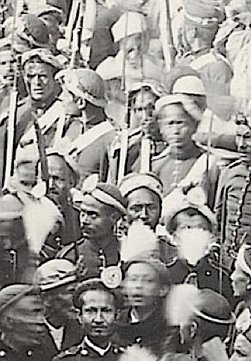 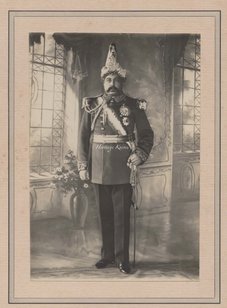 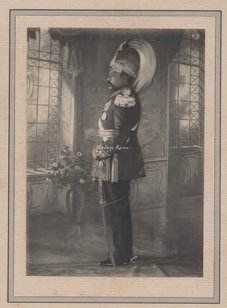 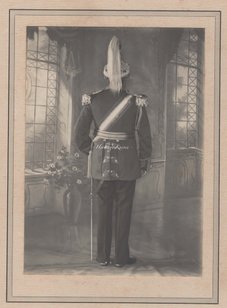 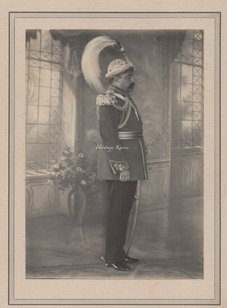 A Rana officer from the early 20th century in Ceremonial uniform with Red coat and  black pants. The decoration on the arms by the wrist suggest a rank of Colonel or above, as well as the Ceremonial head gear which was common for Generals. This type of uniform became standard for higher officers during the Rana Era and ordered from Ranken in Calcutta among others. 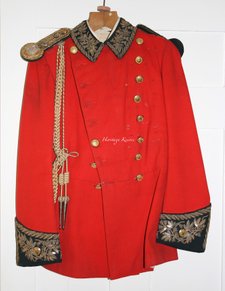 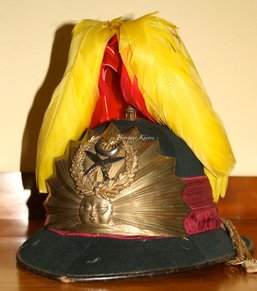 Similar to the images above but in colour and from the 1940s to early 1950s as used by Generals of the Army.

The Pith helmet in now only used by the ceremonial Cavalry of the Nepalese Army.

The Kukri/Khukuri can be seen on the helmet as part of the insignia, the buttons of the Coat have Khukuris too and so does the epaluettes with the Rank insignia. The Khukuri became a strong military symbol over the Rana era and found in most Officers ranks.

For non officers/Battle uniform from WW2 onwards consisted of Green Shirt and Khaki pants as seen in the Coat of Arms from 1945. 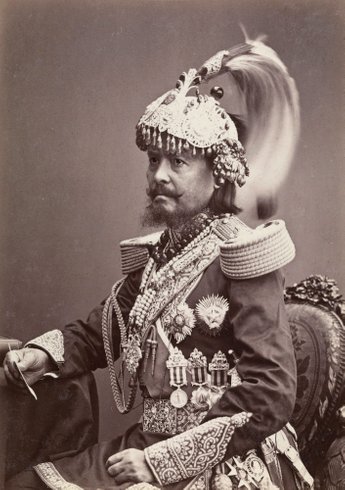 "Photograph of Maharaja Jung Bahadur Rana (Bir Narsingh Kunwar) of Nepal in a half length portrait. The Maharajah is seated and faces three-quarters left. He wears the Order of the Star of India in which he was installed as a Knight Grand Commander and the Knight Grand Cross Order of the Bath. He wears headwear with pearl pendants hanging from the fringe and a military style jacket with large epaulettes."

From an album of photographs presented to Queen Victoria by Dr John William Tyler, 15th January 1887. 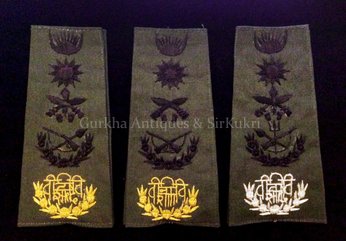 The early Gorkhali army which conquered the Kathmandu Valley did not use shoulder ranks. The tradition of Epaulette´s and later Rank badges/Rank Slides started in the early 1800´s. It was Maharaja Jung Bahadur Rana who firmly established its use in Nepal. The early Rana epaulettes were British and even included the British Crown, gradual development lead to Nepal developing their own symbols, while being strongly influenced by the British. The Kukri/Khukuri became a strong military symbol during the Rana era which is also seen on the symbols used below.

Some of these as used from the Rana period can be seen in the image below and further down modern in two colour from 2018. 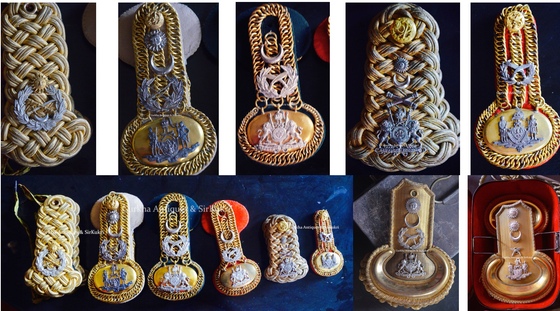 Right - The King of Nepal.

Middle - The Prince of Nepal.

Left- The Crown Prince of Nepal. 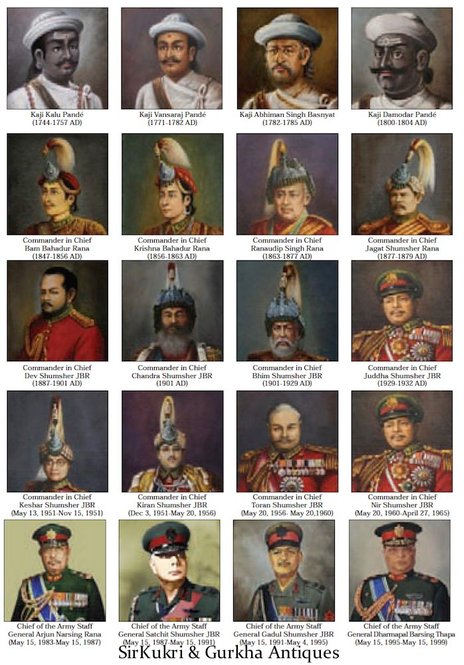 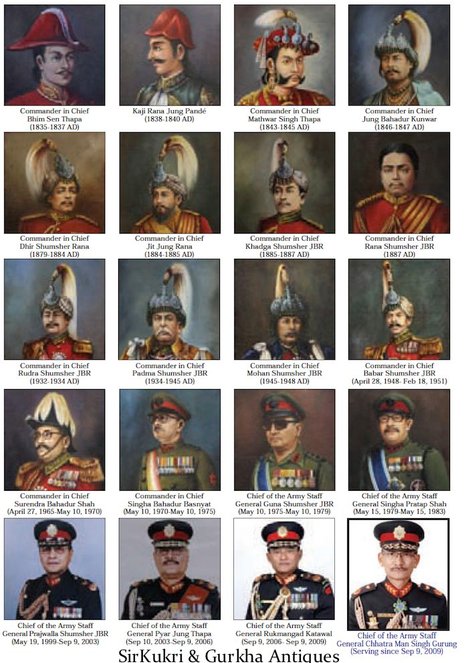 During the unification era of Nepal/Kingdom of Gorkha (18th century and earlier), the Kajis of the Court shared the duty, initially two Kajis, which by the time of the Anglo-Gorkha War 1814-1816 had grown to six Kajis, of them one Kaji with the title Mul Kaji (Head/main Kaji). Each Kaji commanding a sector of the Kingdom, while ultimate decition laid with the King.  Around 1811 Mukhtiyar Bhimsen Thapa assumed the title of General and then started to use the title Commander-in-Chief during the Anglo-Gorkha War. With the establishment of the Rana dynasty in the mid 19th century the post of Prime Minister, Maharaja and C-in-C was made hereditary within the Rana family, usually with the PM himself.

In the late 1970´s the title of Commande in Chief changed to become Chief of Army Staff (COAS), serving as the Chief of the Nepalese Army.