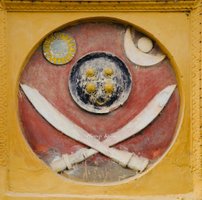 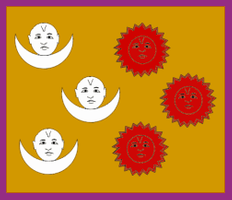 1885 - Instigated the assasination of his uncle Maharaja Ranaudip Singh Rana, the Prime Minister and then took over as Prime Minsister of Nepal (1885-1901), Maharaja of Kaski & Lamjung and C-in-C, thereby establishing the Shumsher Rana dynasty.

1888 - Visited Lord Dufferin, the Viceroy of India in Calcutta where he offered Nepal´s military resources whenever needed. Promised smooth Gurkha recruitment (excluding the high caste) in return for British support of his reign.

1892 - Received a official visit from Lord Roberts (C-in-C. of the Indian Army) in Kathmandu. This was one of the first visits by a senior British official to Kathmandu. Lord Roberts concluded regarding Nepal "to keep on friendly terms with the state from which we get by far the best and most trustworthy of all our Asiatic soldiers." 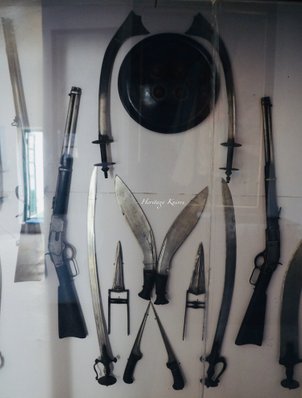 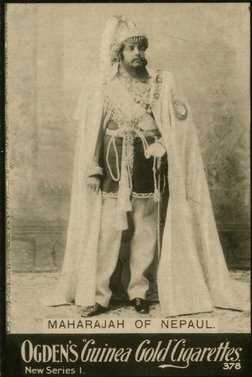 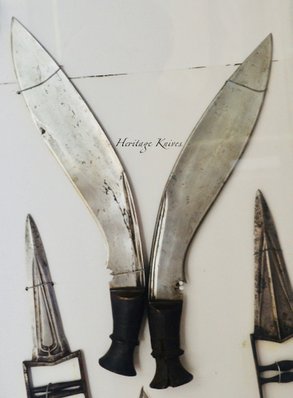 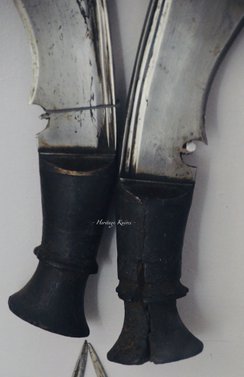 The collection of Arms & Armour at the National Museum of Nepal presented in these pages is the result of Nepal’s history and part of Nepal`s heritage. Developing from the small unknown Gorkha Kingdom in the 16th century to becoming the Kingdom of Nepal over next four centuries. It is the story of the Gorkhalis, which are more commonly known as the Gurkhas/Gorkhas. The weapons they used to become who they are at the dawn of the modern era.

These weapons are the result of Nepal´s many ethnic groups and “tribes” which over the late 18th and early 19th century made the “Gorkhali” a much respected, feared and praised military force. A military force that included martial people and groups in various ways as they expanded in territory and need.

A heritage we Nepalese, Gorkhas and Gurkhas abroad hold with pride. The collection gives a unique insight into a less known field and often over-looked in the history of Nepal. Who would have known that Maharaja Chandra SJB Rana in the early 1900´s had a large appetite for British made rifles, that Napoleon III presented a Sword to his guest Maharajah Jung Bahadur of Nepal in the 1850´s, that many various groups some still in Nepal and some not all fought together under the Gorkhali banner sharing victory and defeat as brothers to secure the Kingdom under Bada Kaji Amar Singh Thapa & Sardar Bhakti Thapa in the early 1800´s, that Chinese and Mughal influenced weapons were used besides traditional Nepalese in the making of the Gorkhali Kingdom, or that Khukuri/Kukri knives had so many various designs?! Studying weapons gives many clues and ideas as to our past, it fosters an understanding of what was based on our own direct observation. From how battles were fought to what influences and contacts we may have had with the surrounding world. These weapons show the changes in the nature of battles and warfare over several centuries and are a proof of a strong martial heritage and tradition which we have largely forgotten today. The collection is evidence to a mighty past of who´s shadow we live in today, while claiming to be Gorkhalis, Gorkhas or Gurkhas!

1887, appointed as Commander-in-Chief following the death of his brother, Rana Shumsher Rana.

Stayed in office for 114 days before being forced out of Officer for his liberal ideas.

Shifted residency to Mussorie, India where he died in 1914. 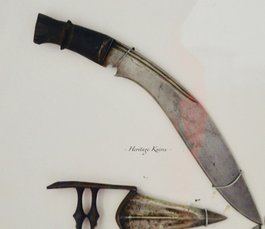 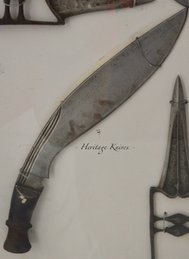 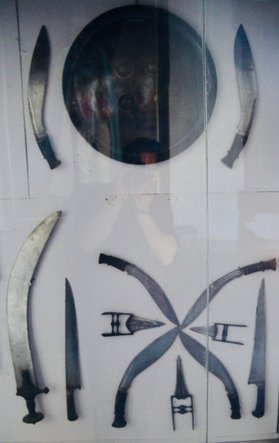 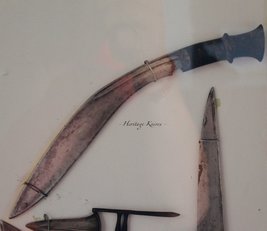 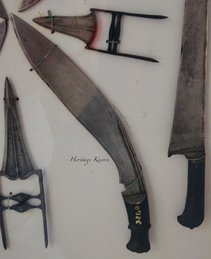 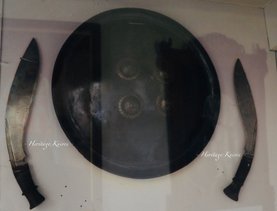 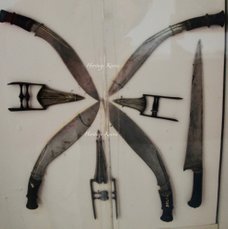 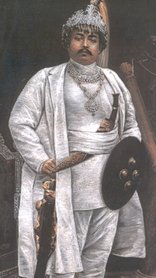 On the other hand the limitation of the collection is that it is not comprehensive to include all of Nepal and the Nepalese as it is badly marked and explained. The display is mainly focused on a small group, the founding fathers and guardians of the Gorkhali Kingdom as told by official history (which is now under debate). A collection we do not know when it actually was initiated except that it was existing in the 1920´s, re-created and turned into the display of Brave history in the 1950 - 60´s to serve the purpose of a national unification under the banner of bravery. Without a doubt the Gorkhalis were brave but that’s not the point anymore, it is an established fact, we need to look further. The Panchayat system (1960-1990) which brought the collection in its current format was also successful in distorting the historical narrative and in that the contribution of the diverse ethnic groups to national development is overlooked and not included. Only the weapons of Chettri (incl. Thakuri) and Magar commanders and officials, and a little of the Malla kings in shown. Groups such as the Gurung, Tamang, Kirat, Newar, Dalits and others are not to be found, the many groups who contributed their blood, sweat and hard labour is not mentioned or shown sadly. There is plenty of space to curate the collection better, with informative texts, images, art and artefacts of the time these weapons were made and used in and by doing so to create a collection more inclusive, to give a more correct image and display of the past.

Important factors in heritage and how history is maintained and displayed are among others general education, economic security, state policy and cultural values. These factors play an important role in maintaining and transmitting history, what would we be without history or proof of our heritage? A Museum exists due to public interest and to incite the public to visit.

Nepal is since 1990 is a democracy and its museums are still largely haunted by the past and have not been able to adapt though there is a rising interest for history and our common heritage, though we may explore it separately.

Educated at Calcutta University but returned to Kathmandu in 1884 when his father was dying. Described by the Chancellor of the University as aman who "can handle the pen not less effeciently than the sword."

From 1888 involved by his brother, the Maharajah, in key areas of State Affairs and admin, incl. responcibility of the Foreign Office.

Perceval Landon wrote "The hand was the hand of Bir but the voice was the voice of Chandra."

At the end of June 1901, removed his brother Maharaja Dev SJB Rana

in a bloodless coup and took over as head of State.

1911, hosts King George V of Great Britain on a hunting trip in Terai. 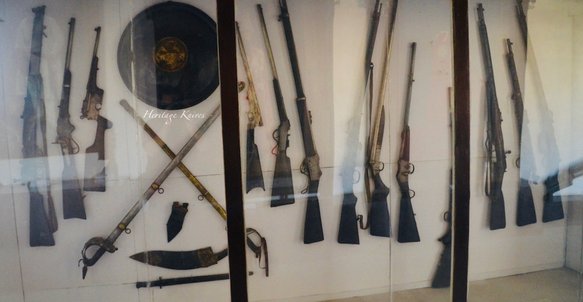 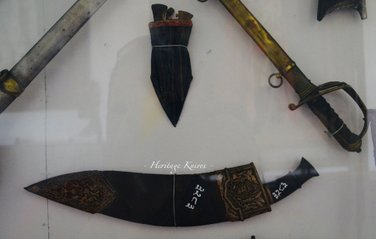 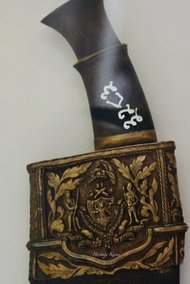 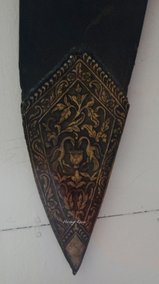 For more info on the Coat of Arms Khukuri style press HERE. 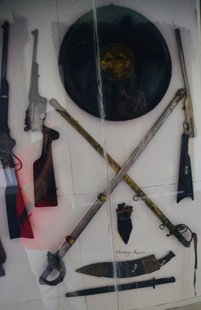 Known as the longest serving Prime Minister of the 20th century (28 years) and for consolidating the State, administrative and social reforms, modernising the military and securing the Independence of Nepal with the Nepal-British treaty of 1923 and at the League of Nations 1925.

The failure of lays in Nepal’s education system to teach an inclusive democratic history as the curriculum has always been politicised and not focused on Nepal itself, its focus has been a self-serving state policy. It is the responsibility of state policy to maintain and promote Nepalese history and heritage, not only to awaken a sense of national pride for votes but for our collective knowledge of each other and our common contribution to the development of the nation if we believe each citizen to be equal before the law and of equal value. We still have to make up with our past as blame can easily be put on the Shah monarchy, the Ranas and so on but blame does not solve the problems we face as a nation today, the solution lays in what measures we take to change. We choose to be victims, observers or makers of history given the right to access our heritage and history, which until a generation or two was not possible and in that history is essential to know.

A history which would include not only the glory of the past but also our mistakes, failures, suffering and the price our citizens have paid to their homeland and rulers. The Anglo-Gorkha War was largely lost due to the elite not being able to understand the common man’s suffering but seeing his own greed as more important. Similarly we bravely boast about the Gurkha soldier being brave and employed in foreign militaries but rarely see the greater “dukkha” (suffering) this brings us as a people and nation. A coin has two sides. That over history many thousands of men from our hills have vanished without memory in wars, in battles we had nothing to do with, whom took service far away from home to make ends meet and support their families, as opportunities were limited at home, while children grew up without father figures, fields were left for children, woman and the elderly to work, in the name of Gorkhali tradition, while tradition is always evolving and changing. The greed never stopped; the State made money on each man who took up service in a foreign military with his life as a gamble. We remain grateful for a tradition which has enabled us to experience and see the world while we hope and pray this land the Gorkhalis made will be blessed to support its own population in the near future, only then will the dream and vision of King Prithvi Narayan Shah be realised, almost 250 years has passed.

We need a history which is anchored in the various groups of the people that make Nepal the country it is and was. The inclusion of ethnic minorities who share the common identity and culture as Gorkhalis and later Nepalese, is through possessing a proper history which is part of the greater national narrative and found in our Museum´s collections over the coming years.

I will ask the reader to before accepting various ideas and what may seem like facts to question the motives, the context and much else as we still suffer from brain drain. Specially in the Kukri world much writing is done by copy and paste, with little contemplation of key events and development. Perhaps forgetting even monkeys can mimic well.

Often without understanding the greater context and mixing up this and that of the past to create a glorious past or a claim of superiority, be it events of the past to current quality or skills, to be able to make a sale, sadly as it often is assumed the buyer has no knowledge and can be feed anything. The death of general knowledge is not only a Nepalese issue but a global issue currently. Enlightenment in the age of Information society seems at times to be a dilemma.

At Heritage Knives we beg to differ as we assume our buyers and clients to know quality, be used to various blades, to know how to use a knife and get accustomed to our Khukuri/Kukris, from the sound they make to how they perform, we believe that you are smart and knowledgeable, or you wouldn’t have gotten this far or found us otherwise;-)

We are like the Himalayas, stable and mighty, humble and reliable and here to serve you with fine Blades and excellent research, thought provoking insights which allows you to place your Kukri into a broader historical context.

Flags, Symbols and Coat of Arms.

The Mallas of Kathmandu Valley

Notes on the Gorkhali Military

or visit the Webshop for fine Kukri/Khukuri knives and more.

Continue reading more, for example on