The Enfield Kukri of WW1.

There are 2 other very rare but clearly Official kukri types I feel must be mentioned.

The First is the very rare English made WW1 kukri often known as the Enfield kukri, In fact they appear to be made by commercial Sheffield firms including S&J Kitchen of which one known marked example has been seen. Some of them appear to have been made by another Sheffield or possibly Birmingham firm. They are known as Enfield kukri because they all carry Enfield inspection markings, dating from 1915 or 1916. They are quite light, very well-made fighting kukri, although once again the choice of hilt timber, that of Birch seems not the best, due to lack of durability. They have rat tail tangs & the blades are usually 12 1/4 to 12 3/4 inches long. And the usually weigh around 15 to 17 oz. I assumed they were first made, as replacement kukri re supply to Europe would have been quicker from the UK than from India. But perhaps the Gurkhas were also less than impressed with the feel of the heavy Cossipore 1915 mk.1s & some of the coarser full tang mk.2s? They are also unusual in often having a slightly stepped indeed recessed ricasso. So far to date we don't know which units were issued these. They usually turn up in a variety of unusual often English made scabbards. 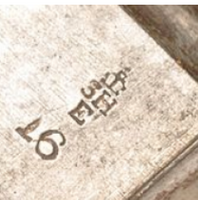 Their scabbards are often covered with khaki canvas.

According to P.A. Hayes of the Department of Weapons for the National Army Museum London It is known that Railway workshops were contracted to produce kukris at this time & I think it quite likely these are from such a source.

They sometimes occur in plain wooden scabbards screwed together without a leather covering, otherwise they have sometimes been put in the official mk.2 pattern scabbards.. Sadly for such a rare kukri, there seem to be a few as yet unmarked fakes out there made by an American knife maker in the early 21st century.

They are known to have been made in 1942 & 1943. At least 2 were property of a n Officer in a British Indian Army Paratrooper unit, but whether they were issued, presented or picked up in theatre, we may never know. 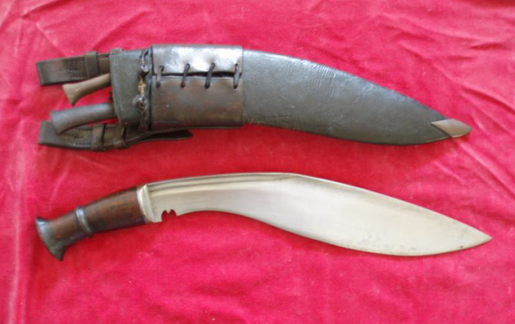 I hope this article has been of interest & use, I welcome any further information & photos emailed to me at spiraltwista@aol.com please include kukri in title.

This finally last but by no means least a British Indian army Khukri used in the 20th century that some assume is always 19th century. It is the pattern colloquially known as the "Longleaf" It was common in military usage during the 19th century but was certainly often carried by some units in the first decade of the 20th century of the up to & in some cases even during WW1. It was the kukri that Goorkhas first became famous with for amazing cutting feats.

The British issue piece although very similar with the Nepalese Army Longleaf kukri, shouldn't be confused with it. It is generally a finer made weapon, often with a partial T spine. Generally, more suitable for parade wear & inspection in the British Indian army fashion as well as being a very fitting & powerful weapon. 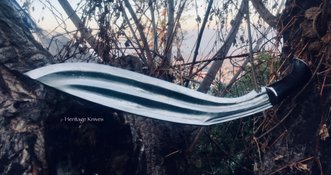