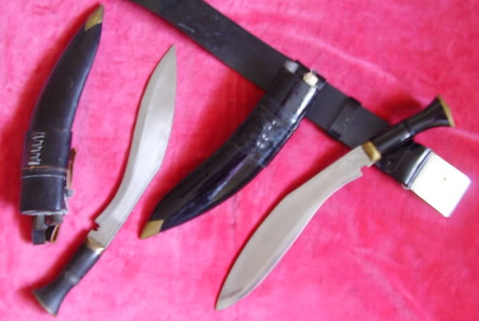 Sometime during the late 1950s to early 1960s the” new” mk.5 kukri was introduced.
Often called the BAS {British Army Standard} or BSI {British service issue.} These are manufacturer’s & sales terms & seem to bear no relation to any British military designation.
This issue model is generally made in Nepal rather than India.

One could argue they are unit pieces as they are currently bought from civilian contractors by the Gurkha regiment. But as, as late as 1969 The MOD was looking for more purchases of the mk.4 kukri, with time & money shortcuts, which implies MOD were still heavily involved in the purchase of kukri at that era. {Wilkinson turned down the request.} So, I regard the mk.5 as a pattern piece.

This shorter much lighter kukri was introduced a few years after every Gurkha had been issued with the British SLR copy of the Belgian FAL automatic rifle, or the Sterling submachine gun. One assumes that by which point the powers that be thought a smaller lighter camping style of kukri was acceptable. Rather than the earlier longer more sidearm/Utility style kukris. But in some ways that makes sense as it does occur occasionally but generally it’s rare for Gurkhas to use kukris as weapons anymore. {Air support & fully automatic guns are the preference.} But by the same token, large numbers of Gurkha buy their own kukri for field & battle use as via private purchase they can obtain longer & higher quality pieces than those there issued with.

This model is made by several Nepali firms nearly all of which claim to supply The British Army & most have done on occasion. In a way it seems irrelevant which of them do as the current versions of it manufactured most seem to be low quality. Many are no different in quality than the average modern tourist kukri one finds.

The lowest bidder wins the army contract each year so for many years Lalit of Khukuri House has been one of the main supplies as the size of his business presumably allows him to undercut the competition. Of course, he was also a Gurkha for many years & maintains his contacts within, the British army, the Gurkhas & at the officer training school Sandhurst.

Hundreds of thousands have been made, but the only Genuine military pieces are those that were actually purchased by the military forces. The others are just commercial copies even if made by the same companies.

The higher quality versions of this kukri I have seen, were made by kami employed by the British army themselves working at Dharan army base. They are normally marked "Ordep Nepal" with a date stamp. {Generally, from the mid 1980s.} With superior fit & finish, they have a superior feel to the ones marketed today that I have handled.

They were made in 2 grades, the higher quality finish ceremonial parade, with plastic scabbard, & the rougher utility versions. Interestingly I've found most other Manufactures ceremonial models are lower quality chrome plaited blade items, But they should still be a useable kukri as its still worn for Guard duty at Buckingham palace & Windsor castle. Etc. {Should doesn't necessarily mean is, of course.]

There have been many minor variations over the years due to the number of manufacturers & time span involved. Blade Lengths of 11 inches are the norm on the 60s, 70s & 80s pieces, weights are usually in region off 14oz. to 17oz.

In the 1990s a slightly shorter variation of the mark 5 came to be commonly issued with a 10 1/4 inch blade often weighing between 17 to 19oz.
In truth many British Indian Army units were issued kukri, most famously the Gurkhas, but in reality, the Garhwali’s, the Kumaon & Dogra also carried them & many other units as well including some Sikh & Military police units. By WW2 Some Chindits & Commando units in the Burma theatre were issued them & indeed most Indian based units were issued a few scabbard less ones as part of utility camp equipment throughout the first half of the 20th century. 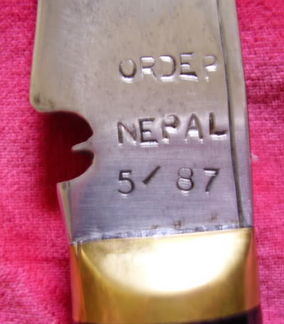 Typical marks found on the Dharan Base made kukris.

Press HERE to continue to part 6, the Regimental/Battalion Kukri.