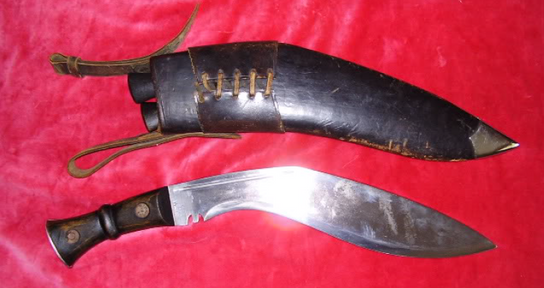 Next we have the mk.4 was the rarest official kukri pattern model to ever exist, and the last 60+ years have made it extremely rare.

It was designed in 1949/50 by Wilkinson Sword Company. It appears the British army wanted to buy British despite the much higher cost rather than keep purchasing from The Indian kukri factories/ Government.

In profile it looks nearly identical to the mk.3 which was obviously its design basis & indeed Wilkinson's appear to have deconstructed an Indian made mark 3 as an example to base their design upon. but also, when examined by hand there are many subtle differences. Including Chrome plating of the tang & buttcap to reduce corrosion & Patina.

Many years ago WSC confirmed to me that only 1400 were ever made, {possibly 1402 including the prototype pattern room & workshop models.}

A very small number for an army production run. Less than 10/% of serving Gurkhas would have been issued with them.

They were a very high-quality hand forged production by some of the world’s leading & famous sword smiths & cutlers & presumably the cost of having them made by WSC was fairly high.

They seem to have been mainly issued in the Far East, particularly Malaya & Borneo.

What happened to them is sometimes regarded as a mystery , I have heard many unsubstantiated stories, mostly saying the Gurkhas threw them away, {Not very likely!} but it seems to me the simple truth is they most where never brought back out of Malaya ever again they were used to destruction in the longest jungle campaign fought by the Gurkha in there their long & bloody history.

A couple of years in the Malayan & Borneo jungles would rust & rot most equipment beyond recognition. According to army sources canvas jungle boots & webbing would be rotting within 2 weeks.

Hence I think the rarity of the mk.4 Wilkinson sword kukri. Not many were made, Then in that extreme environment handles eventually warped, loosened or even rotted & the unless cleaned & oiled every day the steel rusted.

For some reason the grip plates were made of English Beech a most unsuitable timber, prone to rot, warp & insect attack. Why such a bad choice was made one can only guess at, but thanks to Robert Wilkinson-Latham's invaluable help we know that Wilkinson got paid a second time round to re-hilt 50 of them for the MOD within a very short time of their manufacture & then again to supply a further 400 replacement hilts & rivet fittings as well. 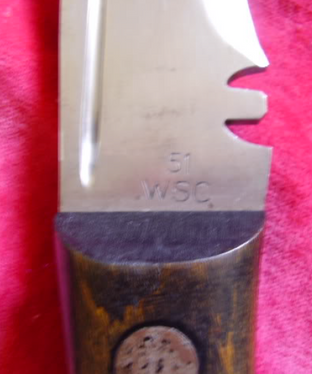 The Wilkinson Sword Company stamp with the year it was made “51” for 1951.

Interestingly the tang although distal tapered in the design specifications, was not actually made with any distal taper, which is also unfortunate, as it affects balance & feel. Which with the quality of workmanship that went into them & place in history seems rather a shame.
Why the Army purchasers & inspectors allowed this apparently unauthorised manufacturing shortcut to happen, once again one can only surmise.

Literally only a dozen or so of them are known to be in existence amongst collectors today. Those found are usually in excellent condition & were most likely examples bought & kept by Gurkha Officers who it seems often held the Wilkinson made kukri in high regard.

It is Often considered the holy Grail for many collectors of British Military pattern kukri.

Press HERE to continue to part 5, the MK5 Kukri.