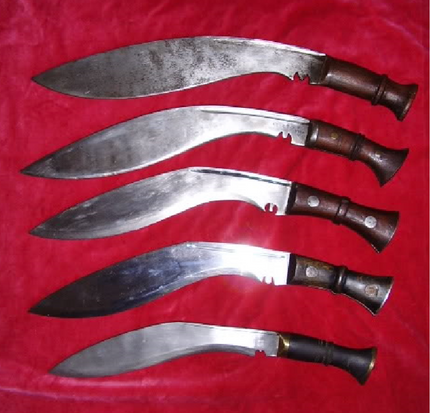 In number order Mk.1 at top.

Within the fascinating history of the kukri, there are many interesting & indeed fascinating types, both civilian & military but the ones that brought them there fame were mostly those that were carried by the British army Gurkha's {Originating from Nepal} throughout the 20th century, particularly those used in WW1 & WW2 which they used with such devastating effect & bravery, winning many gallantry medals in the process.

With this current updating of the article {Which I first published nearly 10 years ago. Bringing much previously then unknown information to light}. I will cover the particular models that bought the kukri to fame & indeed for its enemy, infamy & fear.
Hopefully the article will help continue to answer some of the most frequent questions I see & hear about the main British Gurkha military pattern kukri & those used by various, units, regiments, & of course on occasion private purchases by many individual officers & men.

In all there have been 5 official military pattern kukri.

The First official numbered British Indian Gurkha military kukri the mk.1 was in production by 1903 up until 1915. It was a break from the traditional hidden partial tangs to a full-length rat-tail tang culminating in turn nut similar in design to a rifle stock fitting recessed into the walnut butt. The raised nut system is also seen in 19th century Afghan army kukri & many historical swords, But the sunken circular nut is a clear identifying feature for these kukri´s. 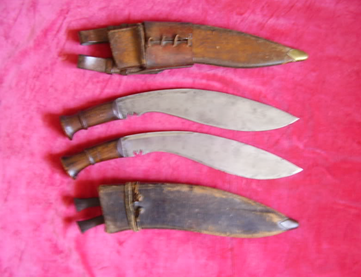 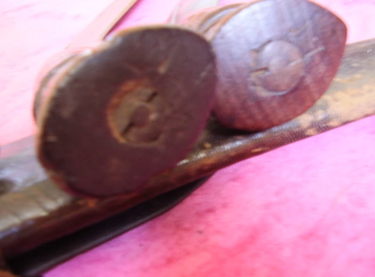 The MK1 Pattern Kukri, sometimes referred to as the Great War kukri.

Many of them are unmarked although some later 1915 models carry the manufactures armoury stamp Co. For Cossipore Armoury. Often FW marks on the spine occur which are the inspection & or issue marks from Fort William in Calcutta, the rarer QA & RP inspection marks also show up for Rawalpindi & Queta respectively. Some pieces carry more than one inspection or issue mark. Many of this kukri were subcontracted to local civilian workshops. One of which was E.Boota Singh & sons, based at Rawalpindi.

The Co 1915 models seem to be heavy, badly balanced & clumsy in hand although well made, I have often wondered if that last batch of Co. kukris was the nail in the coffin for that design as a military piece.

Although all mk.1s are rare, & most are short handled, as always with kukri variants do occur the lighter weight longer handled one is a one of the rarer variants. It may be a private purchase or regimentally produced piece as it bears no inspection marks, but it still comes with the rare Official issue mk. I scabbard, equipped with pockets loops & buttons. The only rarer Official issue scabbard known is that made by. A cooper of Birmingham in 1915,1916 & 1917, which features a rigid leather body with internal flat springs riveted into place to hold the kukri in position {Illustrated below.} Mk.1, Mk2 & English made kukri of WW1 dates have all been found in these, although the scabbard seems designed for the Cossipore made mk.1 or fit all amalgamation of styles or perhaps an as yet unknown possibly indeed probably English made large bladed kukri variant {my personal conjecture}.

springs riveted into place to hold the kukri in position.

Press HERE to continue to part 2, the MK2 Kukri.