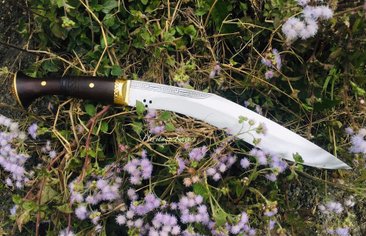 Heritage Knives presents the LIMBU SHAMAN SIRUPATE KUKRI, designed following traditional Limbu village Kukri knives which are used for daily village tasks and also within Shaman practices. It is suitable both as a utility tool and as a fighting knife.

The Limbu Shaman Sirupate Kukri is a reflection of Heritage Knives love for Knife use, 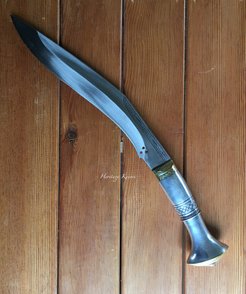 suitable both as a utility tool and as a fighting knife. 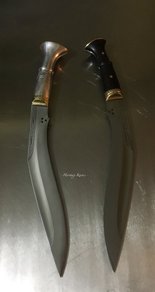 Tang structure (Full/Stick) as per your preferance. 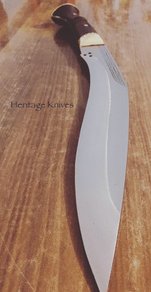 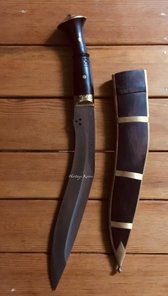 with Himalayan wood scabbard with brass fittings and leather

A strong traditional Kukri carefully hand forged for heavy duty use made with new high carbon steel and of course given a optimum heat treat.

Hollow forged "Ang Khola" blade charachterised by its forged depression assisting the Kukri to be a powerful chopper though the blade does not have a defined large belly. While still being easy to use by its weight reduction due to the hollowness, without compromising the strength, durability or intergrity of the blade. "Ang Khola" meaning back-valley /back-hollow /open back, refering to the spine (back).We have added a high bevel to our fantastic Sirupate which will greatly assist you while using.

Option of Fulltang or Stick tang based on your preference.

The “Sirupate” is a traditional utility Kukri of Eastern Nepal´s hills, holds a strong role in the Kirati (Rai, Limbu, Sunwar, etc groups) culture, and is commonly used for a variety of daily household, farm and village tasks. In modern times it has become a favorite among martial artists.

At times of War it has been a preferred choice among warriors and soldiers. The Sirupate style Kukri is a very popular private purchase/user kukri within the British Gurkhas & Indian Gorkhas and is often carried on active duty.

The name “Sirupate” refers to a green grass species of the Imperata Cylindrica family, also called Congon-grass. It grows long and maintains a slim body, shooting off slim and long grass leafs as it rises up and grows. Similarly Sirupate Kukris are slim blades, usually 11-15" long and with a strong spine.

It is charachterised traditionally by not having a great difference between its minimal and max blade width, following the shape of the Siru grass. The typical Kukri belly is not as wide nor as clearly marked out in a Sirupate. 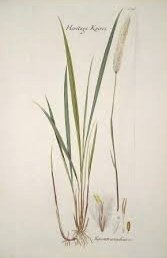 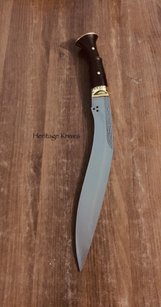 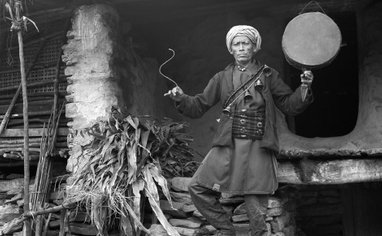 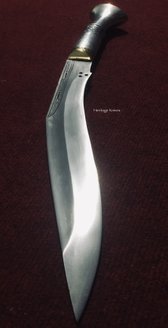 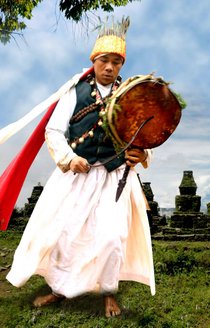 From cutting firewood for cooking food to a self-defence knife carried by herdsmen out grazing the flocks of sheep’s & goats in the Himalayas, the Sirupate is a multi-functional blade widely favoured by those who use it and feared by those who have to face it. Heritage Knives Limbu Shaman Sirupate Kukri is a traditional design based on use in the villages of Eastern Nepal, in particular Limbuwan and adapted for modern use and high standards. 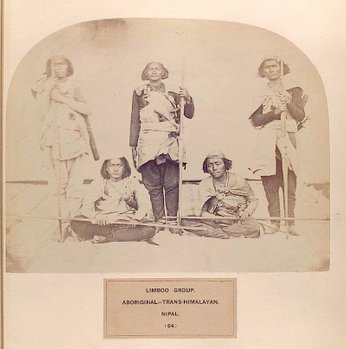 For the past 150 years the Kirati group (Rai, Limbu, Sunuwar, others) have been recruited into the Gurkha/Gorkha Rifles along with several other Himalayan martial tribes and it is not unusual to see a Sirupate Kukri being carried by a Gurkha/Gorkha on duty on the frontline.

The Kirati group makes up a fair amount of the men in the Gorkha/Gurkha Regiments, specially the earlier 7th and 10thGurkha Rifles (of the British Army) were “Eastern” regiments, the Indian Army´s 11th Gorkha Rifles is known as a Kirati Regiment as the majority of men are from Eastern Nepal’s Kirati group. Naik. Agan Sing Rai (1944) and L-Cpl. Ram Bahadur Limbu (1965) are two members of the Kirati group whom were awarded the Victoria Cross, the highest gallantry award in the British Armed Forces.

If one Kukri design had to be chosen to represent Eastern Nepal, its people and nature, the Sirupate would be a clear choice, it has a strong base among the Kirati group, which includes the subgroups; Rai, Limbu and Sunuwar, whom in large numbers join the Gurkhas/Gorkhas. The Sirupate is a Nepali favorite.

Our Limbu Kukri has three holes instead of a notch (kaudi), representing the three worlds the Shaman has to navigate and catch the bad/evil spirit in, the blade represents the heavens, the handle for earth and rounded end/butt the underworld. For this reason Kirati Kukris as used in Shamanistic practises need to have a semi rounded end/butt.

Three”clean” metals are also needed which is the steel blade, brass bolster and copper diamond keeper on the butt-cap, making the knife ritually pure and useful.

For further information on the Kirati Shamans please press here to read Dr. Judkins article on the Mythology of the Kukri, or scroll down to access PDF. 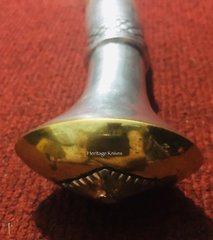 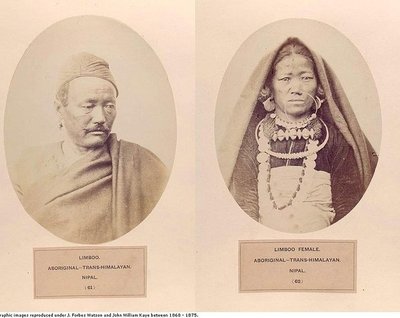 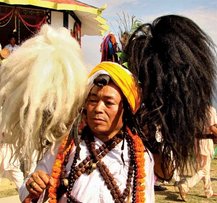 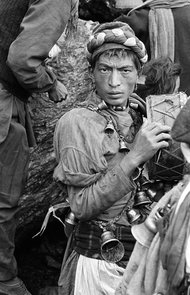 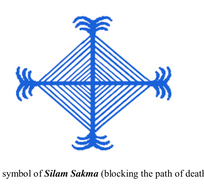 Folk Tales of the Limbu Community

Mythology of the Kukri: 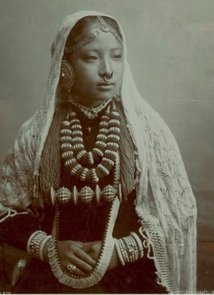